Great news! I found a fantastic charity to work with for my joggling half-marathon Guinness World Record attempt. Not only that, but I'm also on the same charity team as Olympic legend Miruts Yifter "The Shifter"!

Please make sure my frivolous joggling pursuits aren't for naught by making a donation to help AIDS orphans in Ethiopia. Click HERE to donate.

Toronto, ON, October 6, 2014 – On Sunday, October 19, one of the world’s most famous multitaskers, MICHAL “THE JOGGLER” KAPRAL of Toronto, is joining two-time Olympic gold-medallist MIRUTS YIFTER in raising funds for AIDS orphans in Ethiopia with P2P Canada at the 2014 ScotiabankToronto Waterfront Marathon races. Michal is going for a new Guinness WorldRecord for the fastest half-marathon while "joggling" three objects (yes, that's running while juggling).

“I can’t emphasize enough how tough it is to race a half-marathon while juggling every step of the way” Michal says. “I hope to get enough donations to the P2P charity so this absurdly difficult challenge will make the world a better place.” 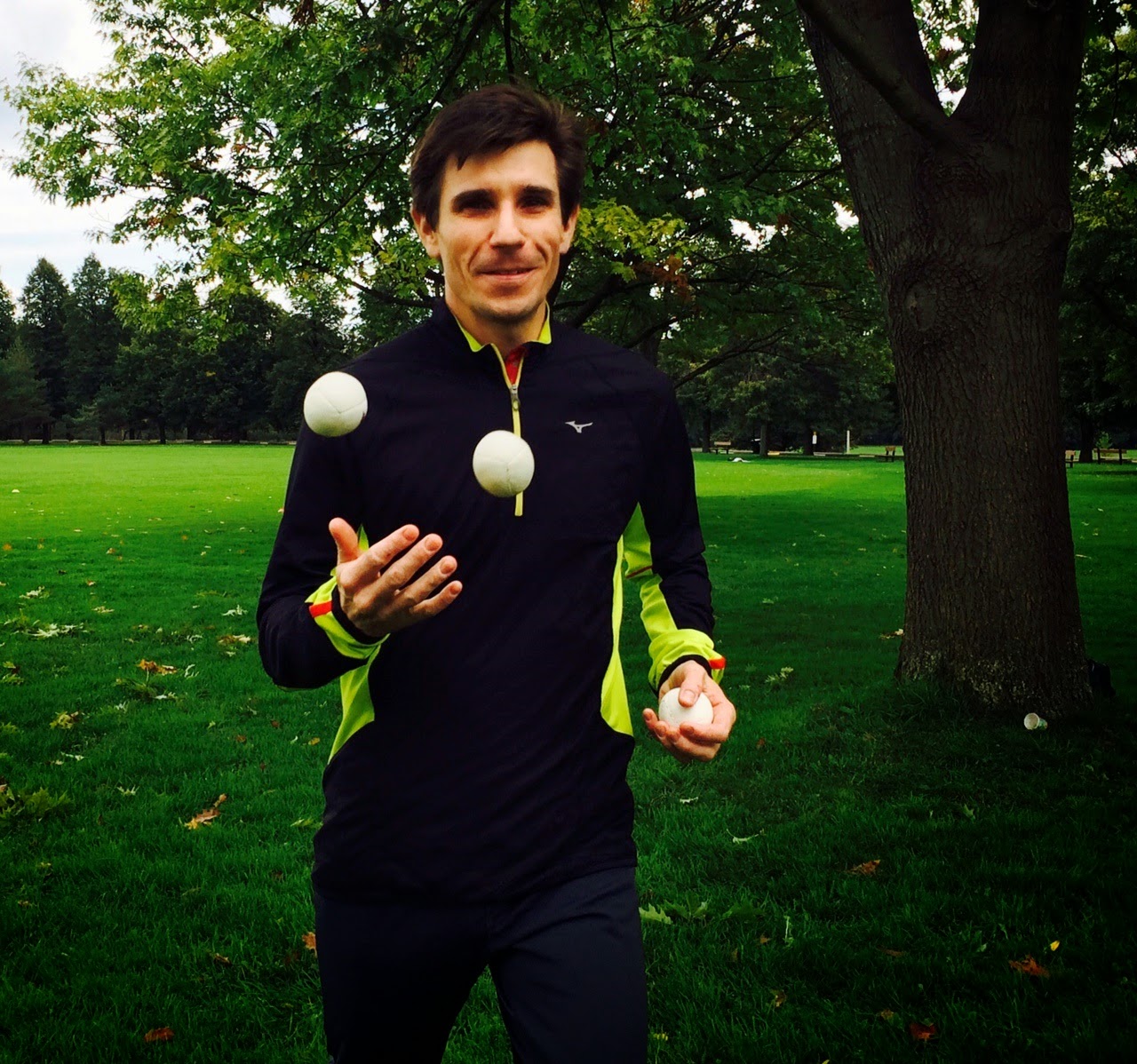 Michal, 42, is the current Guinness World Record holder for the fastest joggling marathon of 2 hours 50 minutes and 12 seconds and also holds the 10K record of 36 minutes and 27 seconds. There is no current Guinness record for the joggling half-marathon, but Michal has joggled an uncertified 1 hour 23 minute half-marathon in the past and is hoping to beat that time. Guinness World Records will have an adjudicator at the race to validate the record on the spot.

While best known for his joggling feats, in 2002 Michal was the overall winner of the Toronto Marathon in a time of 2:30:40 after taking up competitive running just four years earlier. He also won the Burlington Marathon in 2003. A father of two girls, he set a Guinness record in 2004 for running a marathon while pushing a baby in a stroller, with his older daughter Annika as passenger. This summer, he ran a personal-best of 2:03.07 for 800 metres, a non-joggled time that ranks him in the top 20 in the world for his age group.

Michal has joggled seven marathons, three half-marathon and the famed Around the Bay 30K Road Race, as well as several other 5Ks and 10Ks. His battle for the marathon joggling record with American rival (and friend) Zach Warren garnered international media coverage that included appearances on CNN, ABC, CBS, NPR, an award-winning CBC-TV documentary with Evan Solomon and an award-winning feature film, Breaking and Entering. Michal will be starring in an upcoming North America-wide TV commercial and advertising campaign for Fairfield Inn and Suites by Marriott, set to launch in late October.

Earlier this week, People to People Aid Organization Canada announced that the great Ethiopian Olympic hero Miruts Yifter joined the P2P Canada Scotiabank Toronto Waterfront 5K Charity Challenge as honourary team captain. Yifter has wholeheartedly embraced the cause of children orphaned by AIDS in Ethiopia and Michal is pleased to joggle in his footsteps. Team P2P hopes to improve upon the $20,000 raised in 2013 to $40,000 this year. All of which provides life sustaining support to HIV/AIDS orphans in Ethiopia.

MIRUTS YIFTER made his Olympic debut at the Munich Olympics in 1972 where he won a bronze medal at the 10,000m finals. Between 1972 and 1980 Miruts handily won numerous international long-distance competitions, setting world records in many of them. His crowning achievement was winning gold in both the 5,000m and 10,000m finals in stunning fashion at the Moscow Olympics in 1980.

Miruts followed in the footsteps of the great Abebe Bikila – the first African athlete to win gold at the Olympics – and he himself inspired the many supremely successful Ethiopian long-distance athletes that came after him, like Haile Gebrselassie, Kenenisa Bekele and many others. In his heyday, Miruts was known as YIFTER THE SHIFTER due to his unique and abrupt change in speed when executing his devastating kick to the finish.

We call upon the P2P community, supporters and fellow Torontonians to join us on October 19. Run or Walk with Team P2P and the great Miruts Yifter and Michal “The Joggler” Kapral to help raise the funds – which translate into hope – for the tens of thousands of HIV/AIDS orphans in Ethiopia. Join our team today!

To make a donation to Michal’s campaign, please visit: https://secure.e2rm.com/registrant/FundraisingPage.aspx?registrationID=2637636&langPref=en-CA
Posted by Michal The Joggler Kapral at 1:02 PM