It was a huge year for joggling. I think more people in 2015 than in any other year discovered that joggling is “a thing.”


Here’s a recap of some of the year’s biggest moments in running while juggling.

Perry Romanowski capped off 2015 with a mind-boggling joggling streak of 2,599 days and more than 10,000 miles! Perry has likely joggled further than anyone, ever.

Quebec City hosted the International Jugglers Association joggling world championships. Gabrielle Foran, who is working on her PhD in chemistry at McMaster University, defended her title in the mile and 800m. Gabrielle also annihilated the women’s 5K joggling world record in 2015 with a spectacular 18:12.

No woman has ventured into the marathon distance in several years. Dana Guglielmo, the former 5K record holder from New Jersey, has mentioned moving up to the marathon. She has joggled a 1:35 half-marathon and was training hard in 2015, so maybe 2016 will be the year? Regardless, Dana, who was diagnosed with rheumatoid arthritis when she was 17, has been an inspiring ambassador for arthritis research.


Speaking of Dana, she was featured prominently in an excellent history of the sport of joggling in Huffington Post: “The Inventionof Joggling, the Goofiest Sport in History.” I can’t argue with that.

Michael Bergeron of Halifax, Nova Scotia, joggled up a storm in 2015, blasting a 1:28:28 half-marathon at the Blue Nose race in his hometown.

Bocaranga, Central African Republic, became the joggling capital of the world, thanks to American aid worker and joggler Richard Ross. The war-torn nation’s kids became international joggling superstars, proving that peace is possible in the region, and that joggling is more than just a pointless gimmick. 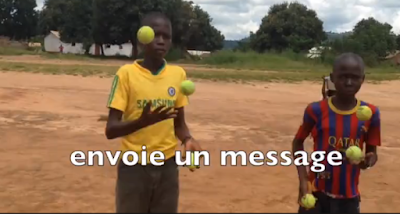 Joggling duo Bob and Trish Evans appeared on the DizRunspodcast to discuss their joggling records.

Joggling appeared on Digg with a video of Eric Walter’s 55-second 400m joggling record with the headline: “Joggling is either the best sport or the worst sport.” (Spoiler: It’s the best.)

The Connect Run Club Podcast introduced their listeners to joggling with a full-length interview with me.

In what New York joggler Chris Pert described as "arguably the biggest bummer in joggling history," the New York City Marathon made the utterly disappointing decision to ban joggling in 2015 for "security" reasons. This was a major bummer for me, but it was even worse for longtime NYC joggler Jack Hirschowitz, who had joggled the past seven NYC Marathons without any problem. The story, which began with a post on this little blog, exploded with a feature in the New York Times.

Funny Or Die published one of the greatest odes to joggling, perfectly capturing the banality and beauty of the sport.

Barry Goldmeier joggled multiple marathons juggling deflated footballs dressed as Tom Brady. The New York City Marathon clearly did not enforce the joggling ban as Barry took his Tom Brady act through all five boroughs. I also took a set of beanbags through security at the athlete’s village (I needed them for a media photo shoot at the race finish).

Joggling got a crazy amount of national network TV coverage thanks to heavy rotation of the Fairfield Inn and Suites commercial. No one believed that “fastest marathon juggler” was a real thing, or that there could possibly be more than one person who did this. My TweetDeck search for “marathon juggler” lead to some hilarity, and a mean tweets joggler edition. 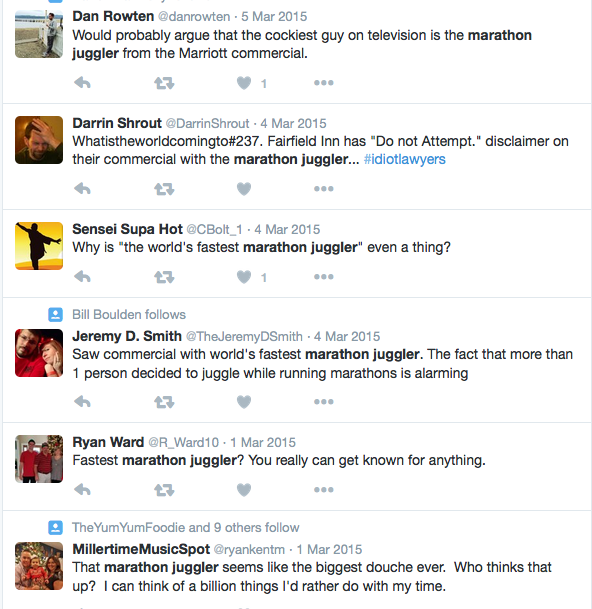 Chris Pert got mistaken for “the guy in the commercial” many times while joggling through Yonkers.  Sorry, Chris.

What a year. What a thing this joggling thing is. And 2016 is already shaping up to be epic for the thing that is joggling.

Posted by Michal The Joggler Kapral at 4:44 PM

This is insane. Really nuts. Plus, I'm not a bad juggler and at times, I've been nearly a competitive runner. Hows the competition for joggling world title in the 55-59 age group for distances from 1 mile to 5K? I might, just possibly, make it onto a podium. Here's a recent video of me trying to revive my juggling skills while eating an apple (I don't do so well, I had forgotten to chew and swallow)...

I think you could burst the joggling scene wide open in that age group. Go for it!